September 19th 2022:
Today we critiqued one another’s surrealism photos in class. It was enlightening to see everyone’s different takes on surrealism, just goes to show that all minds are different. After critiquing, we were introduced to block printing which we will hopefully be getting started on soon. At the last five minutes of class I was able to finally export my surrealism project with the help of one of my classmates.
September 20th 2022:
Today we started block printing in class. I used a picture of the cartoon character “Miffy” since I thought it would be fun to do with the lines. We used pencil graphite as a medium to transfer the printed image on the linoleum. I messed up twice, I finally got it after I had my image reprinted. After my image transferred, I cut away the edges to create negative space. I used a wide tool for this. When I came close to the actual image, I used a thinner tool.
September 21st 2022:
Today was a minimum day. I started with the smaller details such as the flower basket and Miffy’s hands and feet. I did not have enough time to get around to the actual flowers themselves but I was able to hollow out the basket. While I was trying to get the outline more precise, I ended up breaking a part of Miffy’s hand. I don’t know what that’ll look like in the final product but I decided to leave it alone unless it looks off during inking.
September 22nd 2022: 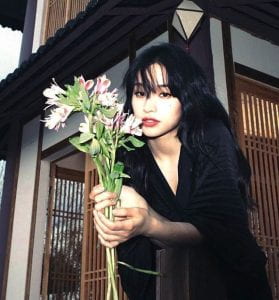 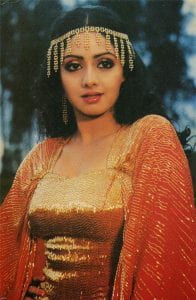 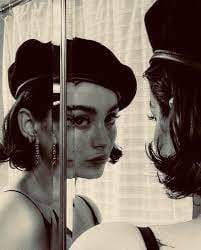 These are the three images I wanted to recreate. For the first pictures, I would have to pick up some flowers and take it from a low angle. However, I think the background adds a lot to the picture so I would have to find a place with a nice background to have the same affect. I would have to take the photo with a flash camera. For the second one, I have most of the accessories to recreate the photo, but I would have to see how I can get that classy Bollywood makeup look. The photo looks grainy which I think I can recreate by exposing it. The last photo is involving a mirror. I think I can easily use my bathroom mirror as I can adjust it for angles. I might need a trifold for it however since I plan on using it as a self portrait. I can use photoshop to make it black and white, however if it looks nice in color I might keep it that way.

Today was the final day of block printing! I worked on my print everyday and I had to go back and adjust it around seven times. However, I did get an end product and a working print so that was very exciting! 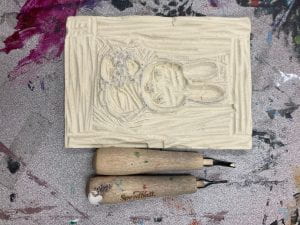 When it came to carving the linoleum, I would mainly used a wide chisel and a fine chisel. I used the fine chisel mainly around the eyes and the flowers, while I used the wide chisel on the background and Miffy’s face. I had to go back in with the chisels several times to make sure that the stamp was deep enough. 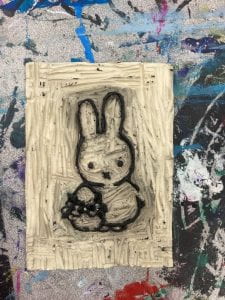 This is how my stamp looks with ink, I did experiment with coloring the flowers and leaves before stamping it but either the color wouldn’t show or it would mix with the black, so I applied color after stamping and after the fabric paint was dry. 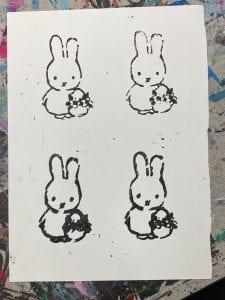 One of the biggest problems I experienced was that the stamp would come out way too thick and smudge and wouldn’t let finer details such as the flowers appear, you can see that on the bottom left. I started putting less ink and this helped a lot, my final verdict was the upper left corner where I only swiped the roller twice upon the stamp and it let the flowers and its petals finally show. 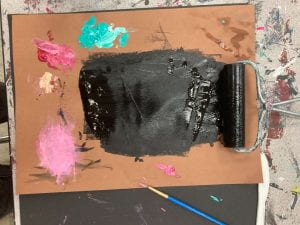 These are the paints I used! I used black for the line art and used the roller to spread the paint onto the stamp. When it came to the flowers and Miffy’s shirt, I went in with a brush and colored those once they were stamped into the paper. While carving, I accidentally cut Miffy’s arm, so I went ahead and fixed that with black paint once the stamp dried. 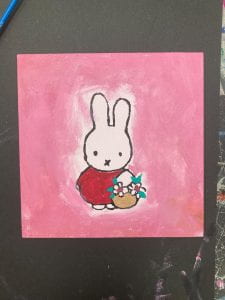 So this was my final product! The only thing I really regret about this was taking more time with the background. I planned on doing flowers in the background but due to time constraints I could not. I painted the wood pink to match Miffy’s red shirt and the base of the flowers. I really loved block printing, I think I may even use it as a tool to apply makeup in my photography.

I decided to do this picture for the recreation project. For this picture, I’ll need to have my camera at F16 and use outside lighting. As for the lighting on the face, I can use the Photoshop levels and curves adjustments to get the effect. As the camera is shot at a low angle, I will be using a tripod. I won’t be able to get the exact color scheme and I won’t be able to recreate the background. I plan on doing it in my backyard and using fake flowers or flowers from Walgreens to recreate it.

So after I decided to take that photo for my recreation assignment, I borrowed a tripod and a camera from my teacher. While taking my photos, I decided to switch to flash. I will say my background is lacking a bit since it was taken in my backyard and doesn’t have the architectural element as the original photo does. However, I will admit I nearly nailed it with the black dress and the hair and makeup. After I took my photos with flash I moved to photoshop. 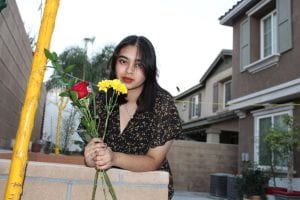 The photo above is the original photo. I first cropped the photo to get rid of the yellow branch and the rest of my backyard. I used the burn tool and layers to make my background darker, I then went back and made my skin brighter to replicate the model’s skin on the original photo. 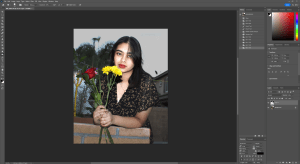 The biggest issue for me was the sky, as it was very bright in the original and appeared white. I went back and painted the sky over with black paint on another layer and lowered its opacity.

I decided to stop there since I achieved that grunge-y look I originally wanted to attain. Overall, I’m happy with it and this was the very first time I took pictures of myself with a tripod.

For my screen print, I wanted a koi fish as it was API’s mascot last year. I got an image and put it through threshold on photoshop. Once I liked how it looked in black and white, I sent the image to my teacher to get it printed.

After it was printed, I spreaded my silk screen with a photo sensitive liquid until it was evenly coated. I let that dry for 24 hours. After it was dry, I put my image on top of the silk screen and let it burn under two lights for 18 minutes. After the 18 minute mark, I cleaned the silk screen until I was able to see the image through the light.

After my image was burned, I prepared a white shirt that I took from my dad. I used red paint as I thought it would help the image pop. I applied firm pressure while spreading the fabric ink, and it actually came out well for the first time. However, because my hand had red paint on it, I accidentally got some on the shirt. In effort of trying to get the fabric paint off, I used hand sanitizer and water and it made it even worse.

I moved on to the tote bag that I was given by my wonderful teacher! This one was my personal favorite and it came out the best.

For my mixed media, I wanted to have my second picture to be water related to go with my screen print. I decided to take a picture in my bath tub and since I was given bath bombs for my birthday, I wanted to use them to bring color to the water. I didn’t have a blue bath bomb so I used a green one. However, when I dropped my bath bomb, IT WAS YELLOW. 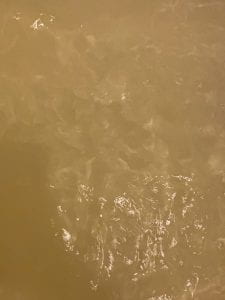 So, with the old great Lightroom, I turned it blue. 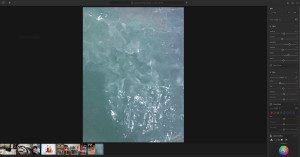 This was my final product for the water: 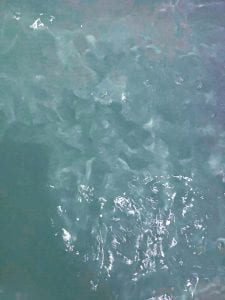 I went to photoshop to add my screen print, I was originally thinking about using black but after I saw how white looked with effects, I decided to stick with white. 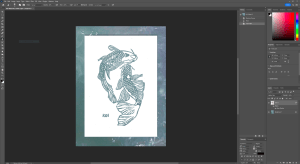 For the water photo. I took it with my iPhone SE, which doesn’t really have the best camera quality but I didn’t mind since it was just water and I wanted it for a background picture.

This was my final product! 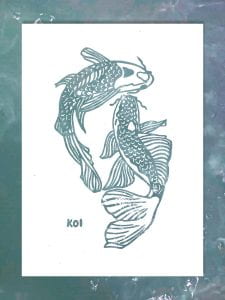 For my “Make a Statement” project, I know I really wanted to use one thing: my sunset light. What is a sunset light? Basically, it is an LED light that emits a colored circle. You can change the color of the circle, and I wanted to play around with blue and red colors. First, I set up my room, and because I don’t have a solid-white bed sheet, I had to use a bed sheet with stars in the background which honestly I didn’t mind much. This is how I set up my room:

I decided to use my brother’s Bluey plushie to see how the shadows and the light works with the sunset light, as you can see in the first picture to the left, the sunset light is the dome-shaped red light. One of two major problems I faced during the assignment was my tripod, I found that it would lean to the left and it just wasn’t very stable.

An even bigger problem I faced was that my pictures kept coming out blurry. I consulted my teacher about this and she mentioned how Autofocus tends to come out blurry in dark spaces. I decided to go to photoshop in order to sharpen the images more, it didn’t totally fix the problem but it did help.

I wanted this to be dual images, so I went to another file on photoshop and joined them together. 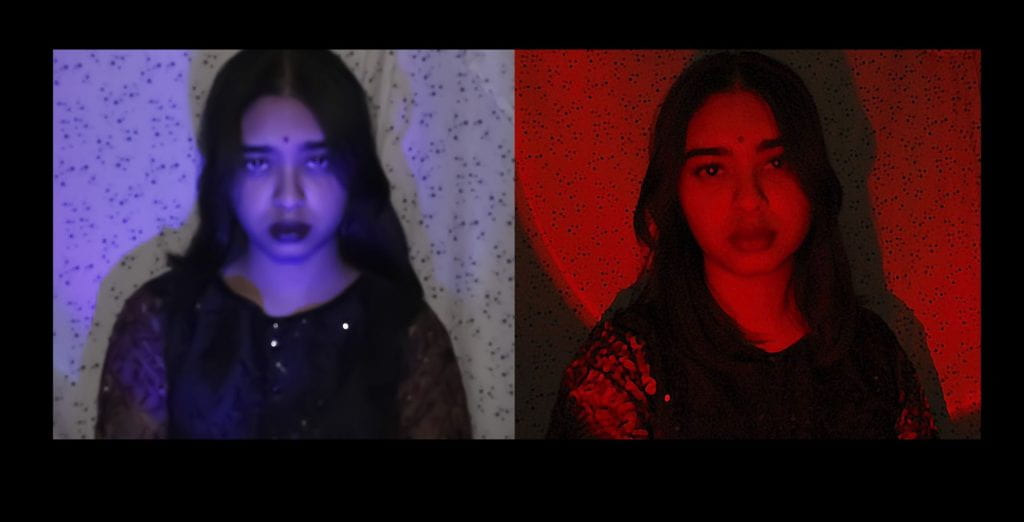 This was my final product, I definitely do want to revisit this as my images came out blurry, but now I know why and how to prevent it. I would like to add that the sunset light did give me a headache, and because I took the red light pictures before any of the blue light pictures, a migraine definitely added to the whole distressed vibe.

Hello, I’m  Shayari! I’m currently a junior in Jurupa Hills Highschool. I’m Bengali-American and I love to cook and treat others.